Reflections on Design Culture Salon 14: How dependent is the design profession on cultures of migration? 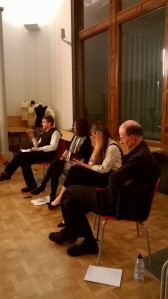 How dependent is the design profession on cultures of migration?

As regular attendees will know, the Design Culture Salons have had a distinctly ‘mobile’ feel of late. Physically, this has involved a migration across the museum from our previous home in the Sackler Centre, South East of the museum (temporarily closed during Exhibition Road excavations) to the more intimate location of Clore 55, a circular room in the north-eastern corner. And like the room itself, thematically this series seems to have been preoccupied with concepts of circularity, from cycling to fashion cycles and the designer’s career cycle. So, it was in keeping with this general theme (and with political dialogue in the run up to the election) that we hit on the topic of migration to ask, ‘how dependent is the design profession on cultures of migration?’

Introducing things, Professor Guy Julier described the great legacy of émigré design culture that has underpinned the profession in Britain since the post-war period. He questioned whether this legacy had created a mythological status on the value of cultures of migration in design or whether there was something structural, practical even, about the relationship between migration and design practice. To test the case, Guy asked the audience to raise their hands if they identified as migrants. Roughly two thirds of the audience arms were raised. The topic certainly had an engaged audience.

The first to speak was Melissa Clark of Method design consultancy. Melissa spoke of the importance of the culture of migration to both Method as a brand and as a team, remarking upon the diversity of its workforce, which represents over sixteen different nationalities in the London office alone. Being able to capture the value of this diversity is a key part of the design process, she argued, and is a valuable asset when dealing with corporate international clients, from McDonalds to Nokia. However, she also stated that it was important not to be complacent about this diversity. She was aware of the privilege in being situated in one of the most densely populated areas of the global creative economy, the ‘Shoreditch silo’. This ‘global view’ is a particular, rather than a universal one.

Alison Clarke, Professor of Design History at the University of Applied Arts, Vienna described her own migration to the field of design history via anthropology and ethnography. One of her first major contributions to the field was in her study of glassware company Ysart, where she paid attention to Pablo Ysart’s journey from Barcelona to France to Scotland as an integral rather than incidental aspect of his identity and formed a tension throughout his work. Similarly, reading Raymond Loewy’s 1951 biography ‘Never Leave Well Enough Alone’, Clarke was struck by the revulsion Loewy continually identifies for American food- a fascinating point to consider in relation to his work there. Nevertheless, Clarke put the point that these personal ‘journeys’ need to be carefully considered before making connections with professional practice. There are careful distinctions and demarcations that need to be made in relation to émigré culture and identities. ‘They are often borne from different modes of displacement’, she said. In particular, a distinction should be made between political and economic displacement and cosmopolitanism. Clarke’s contribution reminded us that questions of identity are always fragile and in a constant state of formation rather than fixed according to the cultural categories of ‘émigré’ or migrant.

Robin Kinross, founder of Hyphen Press and design historian, the final speaker for the evening, brought a vital perspective to the topic as someone involved in the first wave of writing émigré design history in the late 1980s. Personally, he explained, his own interest in design was about ‘finding a way out of the UK’- a journey which brought him into contact with those who had found themselves here, having arrived from elsewhere. He spoke about the practical issues that equipped émigré designers with a specific skill-set, such as the Imperial metric system and being able to communicate in multiple languages. For him, these were indicators and facilitators of a broader ‘European’ mind-set. In this sense, it put these particular emigres (including FHK Henrion and Anthony Froshaug) in a position of privilege rather than vulnerability. He further extended upon Alison’s point about the significance of fully appreciating the circumstances for migration, be they political, economic or otherwise. For him, the issue of cosmopolitanism, was, for Kinross, something quite different to the ‘damaged lives’ of those fleeing the Second World War.

Prompted by Guy, the salon panellists then entered a discussion about some of the key features of ‘émigré’ design culture, including the difference between ‘travel’ and migration and the notion of privilege which is evident among many of the European designers in the formative years of the profession. The discussion also took in aspects of design ‘etiquette’ (with clients and with each other) and the extent to which this is moulded by cultural beliefs and values.

From here, and opening up to the audience, the conversation was rich and covered a wide range of topics, including power and technology. One member of the audience spoke about the materiality of émigré design culture we live with every day in the architecture of London and asked about the extent to which this process of risk and experimentation can be identified today. One barrier to this might be planning laws, for example, which are often culturally rooted and difficult to navigate as an ‘outsider’. The notion of ‘hustling’ was briefly considered as a valuable trait of the migrant designer.

A student in the room described the vitality of studio culture as an interesting example of a site in which the migration of ideas, people and diverse backgrounds meet and are negotiated in the art school. In her case, there are sixty students in her design course at Goldsmiths, representing a total of 20 different nationalities. In this sense, the studio can be viewed as an ‘incubator’ for the structural and cultural features that currently animate our creative economy.

Another audience member was less optimistic. While the design profession might be culturally diverse, its output has never looked ‘more boring’. A generic westernised cosmopolitanism now dominates client briefs and imposes an increasingly generic ‘global’ image of design practice. Examples from those in the room who had recently worked for or collaborated with clients in China, Taipei and the Middle East, confirmed this suspicion: the very act of ‘travelling’ or ‘moving’ in design doesn’t necessarily equate with the migration of ideas, or indeed, inculcate a culture of innovation.

As Guy stated, there seems to be a ‘soft side’ and a ‘hard side’ to the conversation. In this sense, we were missing the contribution of economist Max Nathan, who regrettably had to withdraw from the panel at last minute.

By the end of the Salon, several members of the audience were pushing for a closer convergence in the fields of anthropology and design research. As in previous Salon conversations, there was a healthy dose of cynicism in the air, as people pointed to what appear to be fixed and immobile features of design culture. Robin Kinross, for instance, spoke of the very limited age bracket that continues to define the graphic design profession, (picking up on last month’s salon topic). Therefore, while it is common to talk about design as a migratory, mobile and dynamic practice, the Salon ended by reflecting on the points of resistance within this. In this sense, what started as a conversation about migration came full circle and recurring issues, identified previously in the series, re-surfaced.

The next design culture salon is taking place on 13 March at 6:30pm in Clore 55, V&A Museum. The topic is ‘How does design address immobilities in our society?’

It is free and all are welcome.

This entry was posted in Uncategorized and tagged design culture. Bookmark the permalink.